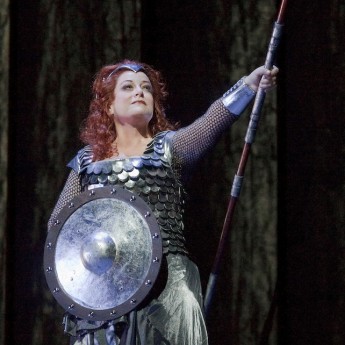 Twenty-five years ago today, the American-born dramatic soprano Deborah Voigt made her Metropolitan Opera debut. The role was Amelia in Verdi’s Un Ballo in Maschera, and the performance would mark the launch of an exciting, colorful career.

“Friday’s performance, her first of Ariadne, revealed one of the most important American singers to come along in years.” wrote New York Times critic John Rockwell of her debut with Boston Lyric Opera earlier that year. “The obvious comparison, among dramatic sopranos, is Eileen Farrell. If Miss Voigt does not soon become an important Wagnerian soprano, she will have taken a wrong career turn.”

Ms. Voigt did become an important Wagnerian soprano, recently singing Brünnhilde in the Met’s new Robert Lapage Ring. From Wheeling, Illinois and later Placentia California, Voigt has sung Verdi, Strauss and Wagner in the world’s major houses. She hosts Metropolitan Opera’s HD Live and PBS’ Great Performance series. Her career has been rich in achievement while her persona has been shaped by challenges, some quite public. Over her twenty-five years on opera stages and in concert halls, we think it is fair to say that Ms. Voigt has forged a special bond with music lovers around the world.

Check out the photos and read the complete article Here