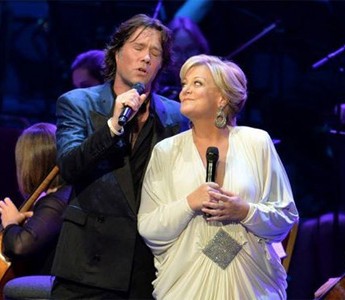 Singing with Kristin and Rufus

As Opera News notes, the soprano “can genuinely cut loose as a Broadway baby,” and this past May she made a special, unannounced guest appearance at Carnegie Hall during a concert by Broadway star Kristin Chenoweth. After Voigt joined the Tony Award-winner for a medley of songs, interspersing such numbers as “Climb Ev’ry Mountain” and “Anything You Can Do (I Can Do Better)” with onstage banter that showcased her considerable comedy chops, the New Criterion reported, “They turned out to be a fantastic pair. Two naturals. … The Voigt-Chenoweth act was at least as interesting and delightful as Sills & Burnett or Sills & (Danny) Kaye, or Horne & Cook.” All told, the evening was “a helluva lot of fun. Musically satisfying, too.”

Voigt gave another special guest appearance with a star best known off the opera stage when she debuted recently at the BBC Proms with singer-songwriter Rufus Wainwright.  On the program, Voigt sang two solo arias from Wainwright’s first opera, Prima Donna, as well as “If I Loved You,” a duet from the Broadway classic, Carousel.

Details of Deborah Voigt’s upcoming engagements are provided below, and more information is available at her web site: www.deborahvoigt.com.