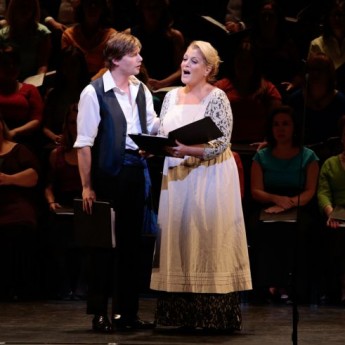 The occasion was a semi-staged concert reading of the operetta by MasterVoices on October 15 at New York City Center, when Ms. Voigt outshowed a cast of Broadway veterans. She found all the laughs in the dialogue without resorting to exaggerating mugging, and she sang the low-lying lines of this alto part with an easy mix of chest and head tones.

If she looked a trifle glamorous for a character the libretto describes as “plain and old”—she showed up in the second act sporting an outfit Auntie Mame might wear to a pirate-themed cocktail party—that was all part of the fun of a prima donna’s reinventing herself as a musical theater diva.

Now that Ms. Voigt has cut her teeth on G&S, I’m eager to hear her as Nettie Fowler, as the Mother Abbess and especially as Mrs. Lovett.