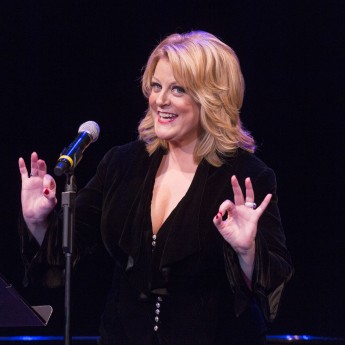 On May 6 & 8, SF Opera Lab presents the West Coast premiere of Voigt Lessons, Deborah Voigt’s confessional one-woman show, at the Taube Atrium Theater. Developed in close collaboration with Terrence McNally and Francesca Zambello at the famed MacDowell Colony, Voigt Lessons weaves 18 songs and arias of special personal significance to the soprano into a vivid and often moving account of her life and career. Directed by Richard Jay-Alexander with music direction by Kevin Stites, the work proved “a seismic event” at its New York City premiere, when Broadway World explained:

“She is immediately likable and is funny and heartbreaking, all at once. … This show is a thoroughly engaging hybrid of entertainment and an extraordinary opportunity to see a big star in an intimate setting.”

After the performances, the soprano will be on hand to sign copies of her memoir, Call Me Debbie – True Confessions of a Down-to-Earth Diva, published by HarperCollins and now available in paperback from Amazon and Barnes & Noble. When the soprano’s literary debut first hit bookstores in January 2015, the press sat up and took note. The Associated Press called it “a startlingly frank look at the life of one of her generation’s most prominent operatic stars.” Opera magazine confessed: “This extremely candid volume is hard to put down,” and the Boston Globe compared it to “your best girlfriend talking to you and telling you her story.”

Voigt’s long association with the San Francisco Opera dates back to 1985, when she received professional training as a member of the prestigious Merola Opera Program, which led to her participation in the San Francisco Opera Adler Fellowship Program for the next two years. Before she rose to international fame, Bay Area audiences first heard the soprano as an emerging artist in the company’s productions of Don Carlos, Jenufa, Macbeth, Nabucco and Die Zauberflöte. She later returned to undertake leading roles in Un ballo in maschera, Tannhäuser, Die Walküre, Ariadne auf Naxos and, most recently, the title role of La fanciulla del West in 2010. In December 2015, Voigt appeared with the 350 voices of the San Francisco Girls Chorus in “An American Christmas” at Davies Symphony Hall.