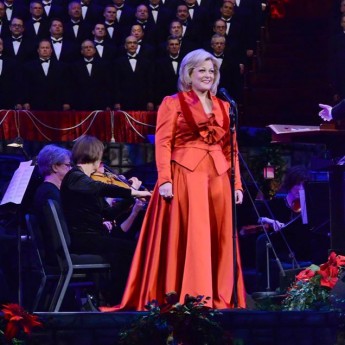 Television audiences have two opportunities to celebrate with Deborah Voigt this holiday season. One of music’s most versatile and endearing personalities, this Thursday (Dec 11) she hosts PBS/THIRTEEN’s Encores! Great Performances at the Met, presenting 19 of the most unforgettable aria and duet performances – including her own rendition of “Isoldes Liebestod” – from the past eight seasons of the Metropolitan Opera’s celebrated Live in HD transmissions. Then, just eight days later on Friday, December 19, the Grammy Award-winning soprano returns to the small screen when PBS/THIRTEEN broadcasts her special guest appearance in Christmas with the Mormon Tabernacle Choir, recorded live in concert last season, and now also available on both CD and DVD. (For local PBS listings, check here.)

Already beloved as a regular host of the Metropolitan Opera’s Live in HD cinema broadcasts, Voigt was the natural first choice for Encores! Great Performances at the Met. She hosts this special new edition of PBS TV’s Great Performances series from the Grand Staircase of the great New York opera house, interspersing selections from favorite operas like Carmen, Rigoletto, and La bohème with her own commentary and backstage interviews with some of the singers. The broadcast features such operatic luminaries as Natalie Dessay, Joyce DiDonato, Plácido Domingo, Renée Fleming, Juan Diego Flórez, Elina Garanca, Jonas Kaufmann, and Anna Netrebko, as well as Voigt herself, in excerpts drawn from the more than 75 Met productions that have aired in the company’s award-winning Live in HD series; as Voigt quips, with a characteristic twinkle, these are “high pressure performances that separate the divas from the girls.” Among the 19 arias and duets chosen to highlight the past eight seasons of the series is the soprano’s own “impassioned, courageous and vocally thrilling” (New York Times) account of Isolde’s aria “Mild und leise wie er lächelt” from Wagner’s Tristan und Isolde.

Voigt returns to television screens when PBS premieres Christmas with the Mormon Tabernacle Choir, which captures her special guest appearance in the Mormon Tabernacle Choir and Orchestra’s annual holiday extravaganza last December, when she sang before combined audiences of 80,000 people in Salt Lake City. Her renditions of the English carol “The Holly and the Ivy” and the lighthearted “The Twelve Days After Christmas” crown a program of seasonal favorites that also includes a dramatization of “A Dickens Christmas”: soaring overhead in a dazzling scene of aerial choreography, British actor John Rhys-Davies stars as the Ghost of Christmas Present.

“The holidays are always my favorite time of year and I’m overjoyed when I have the opportunity to sing Christmas music in concert. Performing with the iconic Mormon Tabernacle Choir and John Rhys-Davies made the experience extra special for me.”

Her performance in Christmas with the Mormon Tabernacle Choir is now also available from PBS on both CD and DVD.

On the heels of her holiday broadcasts, the New Year brings the fruition of Voigt’s most personal project to date: the HarperCollins publication of her candid, funny, soul-baring, and utterly compelling memoir, Call Me Debbie: True Confessions of a Down-to-Earth Diva. A heartfelt, inspirational story offering devastatingly honest insights into the life of an outstanding artist and a remarkable woman, the soprano’s literary debut hits bookstores on January 27. In the meantime, Call Me Debbie may be pre-ordered from Amazon, Barnes & Noble, BAM!, and Indie Bound, while further information is provided at HarperCollins.