What the critics are saying about Call Me Debbie:

“A startlingly frank look at the life of one of her generation’s most prominent operatic stars.” – Associated Press

“It’s like your best girlfriend talking to you and telling you her story.  – Daphne Kalotay in the Boston Globe

Related interviews and feature reviews are also available at these links:

“She is immediately likable and is funny and heart-breaking, all at once. One can also see that she has the skills to be a fine actress. She tells it all – growing up, the addictions, the alcohol, the unhappiness, the frustration and was brutally honest with us. … This show is a thoroughly engaging hybrid of entertainment and an extraordinary opportunity to see a big star in an intimate setting. … It is definitely worth seeing and spending 90 minutes with this unique woman.” 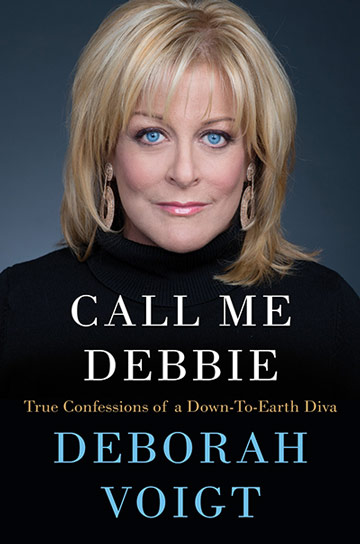 Released in 2015, Call Me Debbie: True Confessions of a Down-to-Earth Diva is one of the most electrifying performances of Voigt’s life. In her strikingly honest memoir, she recounts – with characteristic candor, charisma, and wit – her harrowing and ultimately successful private battles to overcome the addictions and self-destructive tendencies that nearly cut short her life. She describes the events that led to her dangerous gastric bypass surgery in 2004 and its shocking aftermath: her substantial weight loss coupled with the “cross addiction” that led to alcoholism and severe depression before she emerged from the darkness to achieve complete sobriety. Voigt also offers fascinating insight into the roles she’s played and the characters she loves – Strauss’s Ariadne and Salome, Puccini’s Minnie, and Wagner’s Sieglinde, Isolde, and Brünnhilde among them. Enriched with hilarious anecdotes and juicy backstage gossip, she paints diverting portraits of the artists with whom she’s worked, her most memorable moments onstage, and the secrets of her singing.

“I never imagined myself becoming a world-famous dramatic soprano who’d share the stages of the biggest opera houses in the world with the most celebrated vocalists of our time,” Voigt explains. “I didn’t yearn to meet presidents, princes, Pavarottis, and Plácidos. As a child, I only knew I loved to sing – I was singing before I was talking.”

Already known to Twitter fans as a “Dramatic soprano and down-to-earth Diva,” Voigt was named as one of the top 25 cultural tweeters to follow by the Los Angeles Times. She offered something of a preview of her memoir in her confessional one-woman show, Voigt Lessons; boding well for Call Me Debbie, at its Glimmerglass Festival premiere, the show was pronounced “chatty, witty, and sometimes painfully poignant” (New York Times).

This site uses cookies to ensure you have the best browsing experience. Ok